Bourbon Whiskey is the undisputed heavyweight champion of spirits in the United States with a rich history and tradition backing it up. Although the bourbon industry was badly weakened as a result of prohibition, by 1953 it was the top selling spirit in the country and in 1954 Congress declared it the “Native Spirit” of the U.S. This act of congress not only designated Bourbon as a distinctive product of the United States, but also created strong trade protection against foreign competition. While Bourbon can legally be made anywhere in the United States, it’s no secret that Kentucky has earned a reputation for doing it best. Kentucky is home to some of the most historic and iconic bourbons out there (like the famed Pappy Van Winkle) which can make it a daunting place for distillers who perhaps want to break from tradition a bit. Enter Shane Baker and Pat Heist of Wilderness Trail Distillery, a couple of former rock-and-rollers with a strong and diverse background in science and a desire to make delicious Kentucky whiskey using updated processes that embrace modern technology.

As men of science that grew up in Bourbon country, naturally Shane and Pat became professional whiskey consultants. This profession gave them unique access to hundreds of distilleries over the years, studying innumerable samples and developing a distilling philosophy that ultimately became Wilderness Trail. Much of Shane and Pat’s research revolved around the diverse bacteria found in distilleries, and the result it can have on the end product. Bacteria is always present during the fermentation process, and to some level it is desirable as it can aid in the creation of flavor molecules. For example the fermentation of rum in the hot humidity of Jamaica creates a bacteria rich environment that results in the increased production of funky and flavorful ester compounds. However if these bacteria get out of hand, they can inhibit the activity of yeast and the production of alcohol. Further, if the wrong type of bacteria takes over the resulting flavors might be less than desirable. Historically this problem has been solved by adding backset from a previous successful batch of mash into the new batch. Known as sour-mash fermentation, this method effectively lowers the pH of the mash and prevents bacteria from flourishing. For better or worse this method allowed distilleries to achieve a level of consistency that was otherwise unachievable at the time. However, Pat and Shane knew that sour-mash fermentation was no longer a true necessity.

While tradition can be a beautiful and necessary thing, it can also delay progress. At Wilderness Trail tradition is an ever-present tool, but they don’t let it become an impediment. By using modern equipment and materials, Pat and Shane have eliminated the need to use backset in their whiskey mash. So instead of the traditional sour-mash fermentation process, they use a sweet-mash fermentation process that is uncommon in general, let alone in Kentucky. Much of what allowed Wilderness trail to use sweet-mash fermentation revolves around sanitation, cleanliness, and temperature control. They use stainless steel fermentation tanks that are much easier to clean than their wooden counterparts. Wilderness Trail also deep cleans after every batch of whiskey using their chemical free steam boiler. This allowed them to ensure no bacterial contamination will stick around from previous batches, and allowed them to start fresh and achieve more consistent results. Pat and Shane also believe that using a sweet-mash allows them to draw more flavor from the grains while achieving a softer and more enjoyable finish. Starting with a more flavorful product means that Wilderness trail whiskeys require less assistance from barreling to achieve full flavor, which is why they are so delicious and complex after only 4 - 6 years of aging.

While there are too few distilleries using sweet-mash fermentation to form any definite conclusions about the true differences in the resulting whiskies, one thing is certain; Wilderness Trails uses sweet-mash to make exquisitely expressive and enjoyable whiskies. Regardless of how they do it, these modern Kentucky Bourbons and Ryes are both smooth and complex, despite their modest age (Wilderness Trail only opened in 2013). At Natural Wine Company we’re fortunate to have 5 distinct whiskies available from Wilderness Trail Distillery: Small Batch Bourbon Whiskey (4 years, B.I.B), Settler’s Select Single Barrel Rye Whiskey (4 years, Barrel Strength), Single Barrel Wheated Bourbon (4 Years, B.I.B), and the 6 Year Straight Bourbon Whiskey (6 years, B.I.B). In addition to these offerings we also have a special bottling of Mic Drop Rye Whiskey (4 years, 108 proof) from PM Spirits, which is an artfully blended selection of 5 casks of rye from Wilderness Trail. Though all of these whiskies are well worth trying, I tasted the 6 Year Bourbon and the Mic Drop Rye for purpose of this blog.

At 6 years old this is the most mature whiskey that Wilderness trail has yet to release. The sweet mash for his whiskey consisted of 64% corn, 24% rye, and 12% malted barley, and it was distilled in a copper pot still. The nose on this bourbon immediately draws you in with notes of fresh apple, candied green apple, caramel, clove, banana bread, roasted nuts, and vanilla bean. At 100 proof the palate is surprisingly smooth though definitely not without a pleasant spice. Despite all the sweet notes that this bourbon gives off there is nothing sweet or syrupy about it. The palate contains many of the same fruity and spicy notes found on the notes, with the addition of lovely herbal cherry notes, and a spicy woody finish that brings cigar tobacco to mind.

As mentioned above this is a private special bottling comprised of 5 carefully selected casks of rye whiskey from Wilderness Trail. The sweet mash for this whiskey was 56% rye, 33% corn, and 11% barley malt. The nose is full and expressive with notes of chestnut honey, melon, malt, bruised apple, and caramel. The palate is sweeter than expected for a rye, but beautifully balanced with a lovely rich texture. The palate has notes of honey, malt, caramel, tobacco, and candied peanuts. There is a bit of spice as expected from a rye, but is incredibly smooth with a long finish. This is a really special whiskey. 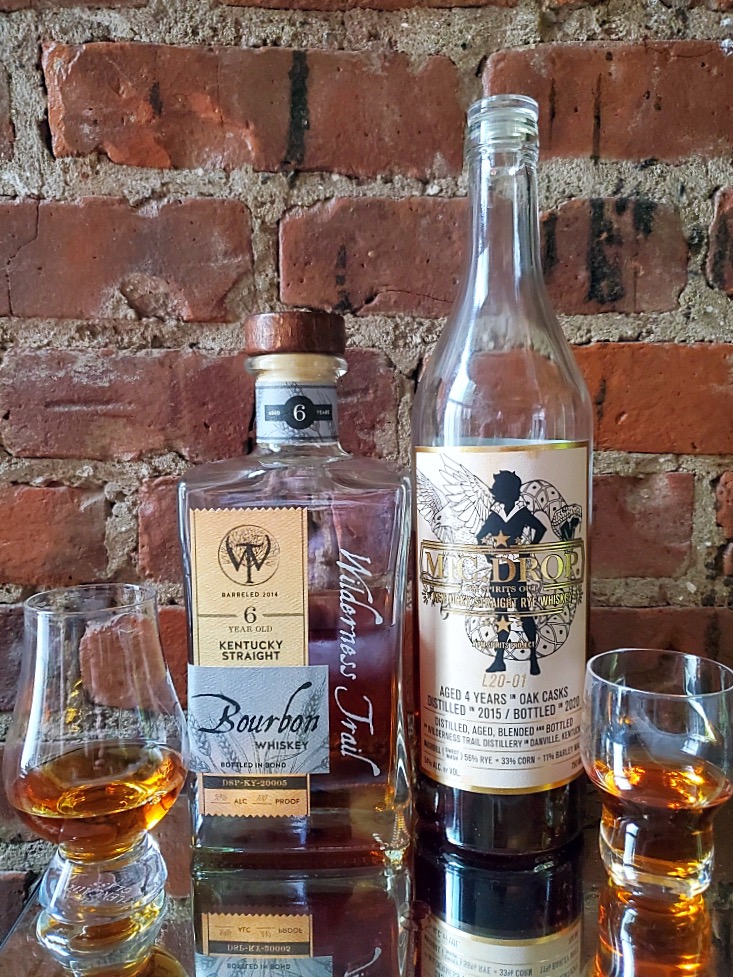