It was Shakespeare’s Juliet who queried, “What’s in a name?” Well, when you're not talking about your star-crossed lover, but rather about grape varietals, quite a lot - history, dialect, and in the case of the grape Zweigelt, Nazi fascism.

The story begins with the varietal’s creator, Friedrich “Fritz” Zweigelt. Born in 1888, this Austrian entomologist and phytologist was one of the leading and most influential figures in the viticulture world from the 1920s until the end of WWII. During that time he became the Head of State of Vine Cultivation, as well as acting as Director of the School of Viticulture and Horticulture in Klosterneuburg near Vienna. He was also a strong nationalist, anti-semite, and member of the Austrian Nazi Party, after joining in 1933.

In his time, Fritz Zweigelt crossed many varietals, though none would become more successful than when he crossed Blaufrankisch with St. Laurent in 1922. The results yielded a grape that would later be known as Blauer Zweigelt when fellow Austrian viticulturist, Lens Moser, began propagating and selling the vines around 1960. In 1975 Zweigeltrebe Blau was added to Austria’s official index of quality wines. There is some debate as to exactly when the name “Rotburger” came to be used, but it’s likely to be the mid to late 1970s as well.

This isn't the only case of varietals being named after Nazis. A white grape dubbed, “Dr. Wagnerrebe,” took its name from Dr. Richard Wagner, a Nazi politician, and was later renamed following the Second World War. In Germany it is now called “Scheurebe” after its creator Georg Scheu, and in Austria it carries the name Sämling 88.

So why has the name Zweigelt remained even when the other's haven't? As Austria’s most popular red grape varietal, a name change back to Rotburger could cause confusion, crushing the grapes' growing global sales. Even so, artist groups and newer, younger winemakers would rather face these challenges to come than continue to use the name Zweigelt, honoring the late Nazi.

Included in this group is 29 year old winemaker, Christoph Heiss. Coming from a winemaking family, Christoph gained additional experience in New Zealand, Germany, and South Africa before returning to Austria to make his own wines in the eastern Kamptal region under the name Malinga. The grapes come from organically farmed vineyards that are hand-harvested, spontaneously fermented, and often aged on the lees. All the wines are bottled unfined and unfiltered, with low sulfur additions.

The 2019 vintage is medium ruby in the glass, and shows aromas of fresh, bright red berries, pink peppercorn spice, and floral violet notes. The wine carries a savory edge as well, and on the palate, tart acidity, a medium-minus body, and fine tannins leave the palate feeling alive and uplifted, ready and eager for the next sip. Though quite delicious on its own, the wine is ideal for food pairings, including pan-roasted chicken legs with braised cabbage.

In a recent change, this Zweigelt bottling, too, has changed its labeling to bear the name “Rotburger,” - a conscious look towards the future while condemning the storied past of the grape and its creator. 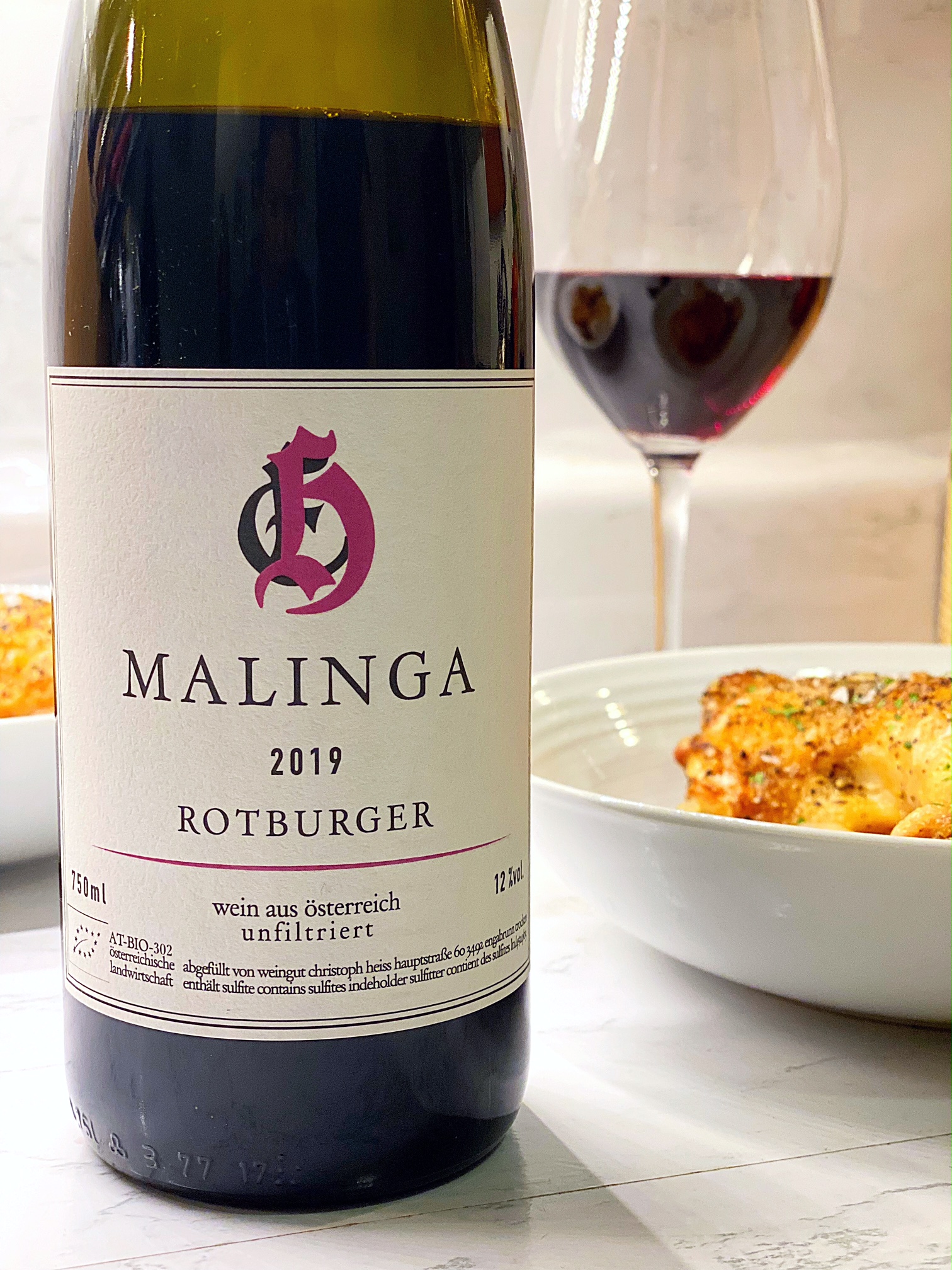