With Saint Patrick’s Day fast approaching and a bar scene that has been dramatically curbed by covid-related regulations, those who like to celebrate the holiday in typical American fashion may be wondering how to pay proper homage to the birthplace of whiskey this year. Since most of you (hopefully) won’t be packing into your favorite Irish Pub next week and slogging down countless shots of Jameson and hastily poured Guinness drafts, this seems as good a time as any to discover the terroir driven beauty that is Waterford Irish Whisky.

But first let’s start with a little history. The word Whiskey is derived from the Gaelic term, Uisce Beatha, which means “Water of Life,” and many believe that it was the Irish who first harnessed the power of distillation to make whiskey, potentially as early as the 12th Century AD., and later introduced it to the Scotts. So why then is Scotch whisky so often viewed as the benchmark of fine whisky while Irish whiskey is more of an afterthought reserved for shooting rather than sipping? Well, interestingly enough this was not always the case. Go back about a century and you’ll find Irish whiskey firmly planted on top of the mountain. Around the year 1900, Ireland had at least 30 distilleries operating and churning out high quality pot-still whiskey, most of which was either being consumed locally or being exported to a massive and lucrative American market. Meanwhile most Scotch whisky exports were going to Britain. Sadly, the turn of the century would bring unbelievable hardship to the Irish whiskey industry. It was one thing after the next: The Irish Rebellion of 1916, Prohibition in America, two world wars, a worldwide depression, The Troubles in the North, and mass emigration all slowly but surely took their toll on the industry, leaving Ireland with only 2 operating distilleries by 1980.

While it’s true that Irish whiskey was all but beaten into submission by the circumstances of the 1900’s, the modern revival of craft spirits and the booming global market did not leave Irish whisky behind. There are now once again over 30 quality distilleries operating in Ireland again, with over 20 more in development. So with all due respect to Jameson and Bushmills, we’re here to talk about the new and exciting Waterford Distillery, which in my opinion is making the most delicious Irish whiskey out there, and doing so in a way that really vibes with the natural wine world.

Waterford distillery opened in 2015 in a former Diageo facility that was originally built for brewing Guinness beer. Waterford’s founder Mark Reynier purchased this state-of-the-art facility, located on the beautiful River Suir, and converted it into a high tech whiskey distillery. But this facility was just the start of Reynier vision of what Waterford Whisky could be. The real story of Waterford Whiskey is as much about the land, the farmer, the crop, and the climate as it is about the distillation process. Much like the world of fine wine, Waterford Whisky focuses beyond the lens of national and regional terroir, zeroing-in on individual farms, farmers, and crops. In other words, Waterford is making single farm origin whiskeys much like a vintner would make a single vineyard wine, which is widely considered the purest expression of terroir.

Currently Waterford’s two single farm offerings available in the US (only available in the US) are Dunmore Farm Edition 1.1 and Rathclogh Farm Edition 1.1. In addition to these two beautiful single farm whiskeys, Waterford also offers the Organic Gaia Edition 1.1, which as the name suggests is made entirely with organic Irish barley. Understandably, Waterford’s organic whiskey is not yet single farm origin, as the low yield of organic barley makes it difficult to find an organic farm large enough to provide all of the grain required. However, Waterford is working to change that, and is also reportedly working on incorporating biodynamic farming as well.

If you wanted to know more specific details about Rathclogh or Dunmore Farms, you’re in luck. Mark Raynier believes in the 3 T’s when it comes to making Irish Whiskey; Terroir, Traceability, and Transparency. These are not only values that he preaches, but it’s immediately clear upon visiting the Waterford website that they practice what they preach. They make available as much information as a consumer could want, including details about the distillery, the barrels, the grains, the water, and so on. The pièce de résistance, however, is the “Terroir Code” featured on the back of every bottle of Waterford Whisky. Enter this code (mine is F016E01-01) at WaterfordWhisky.com and you’ll be virtually transported to the farm where your personal bottle of Waterford started it’s life. As I sit here writing, I’m listening to am audio recording taken from the middle of Rathclogh Farm in County Kilkenny, where I can hear the grains blowing in the wind and a variety of birds chirping. You can also view a video introduction of farmer Richard Raftice and his family, view the “Barley Timeline'' with exact dates, a satellite image of the farm from Google, and see the complete breakdown of the specific barrels used to make your bottle. I have never seen anything like the level of detailed transparency that Waterford provides on their website, and I truly hope they’re setting an example and forging a path that other wine and spirit producers can follow.

Fortunately, Waterford Whisky is not just good on paper, they are also absolutely delightful to imbibe. These single malt barley whiskies are both elegant and delicious, and they truly provide the drinker with a taste of a particular time and place. Even beyond the terroir beautifully captured in each bottle, I’d put waterford up against a lot of whiskies that are far older and more expensive.

The Rathclogh Edition 1.1 is made from 100% malted Irina Barley grown on Rathclogh Farm by Richard Raftice, and aged for 3 years, 11 months, and 26 days in a combination of 31% first-fill US oak, 19% virgin US oak, 25% premium French oak and 25% Vin Doux Naturel before being bottled at 100 proof with zero additives. The Rathclough 1.1 has a lovely nose full of rustic barley notes, followed by black peppercorn, the scent of a dry stick of classic bubblegum, caramel, and even some dried fruit. The Palate is soft and smooth with the barley again shining through as the star, with a supporting case of citrus, vanilla, hay, butterscotch, and coffee.

The Dunmore Edition 1.1 is made of 100% malted Irina Barley grown on Dunmore Farm by John Tynan, and aged for 3 years, 11 months, and 17 days in a combination of 33% first fill US oak, 18% virgin US oak, 25% premium French oak and 24% Vin Doux Naturel before being bottled at 100 proof without the use of any additives. The Dunmore 1.1 has a nose that also starts with earthy barley notes, fresh banana bread, orange peel, and some light baking spices. The palate is light and elegant with a delicate spice, and notes of malted barley, hay, grass, Pop Rocks candy, Boston baked beans candy, and a bit of tobacco on the finish.

And last, but definitely not least, the Organic Gaia Edition 1.1 is made from 100% certified organic malted Irish barley grown by farmers Paddy Tobin, Alan Jackson, Pat and Denis Booth, Jason Stanley, Trevor Harris and John Mallick. Organic Gaia 1.1 is matured in a combination of super-premium oak: 42% first-fill US oak, 17% virgin US oak, 18% Vin Doux Naturel (sweet fortified wines) and 23% premium French oak. It’s bottled at 50% ABV without coloring, chill-filtration or any additives. The nose is extremely fresh and fruity, with notes of malted barley up front, followed by notes of apple, quince, some light tropical fruit, and candied nuts. The palate is consistent and smooth with many of the same notes shown on the nose, with the addition of some caramel and spices.

The Organic Gaia 1.1 is probably the most expressive and my favorite of the three editions that are currently available at the shop, but any of these fantastic Irish single malts would be a perfect accompaniment to your St. Paddy’s Day, however you spend it. 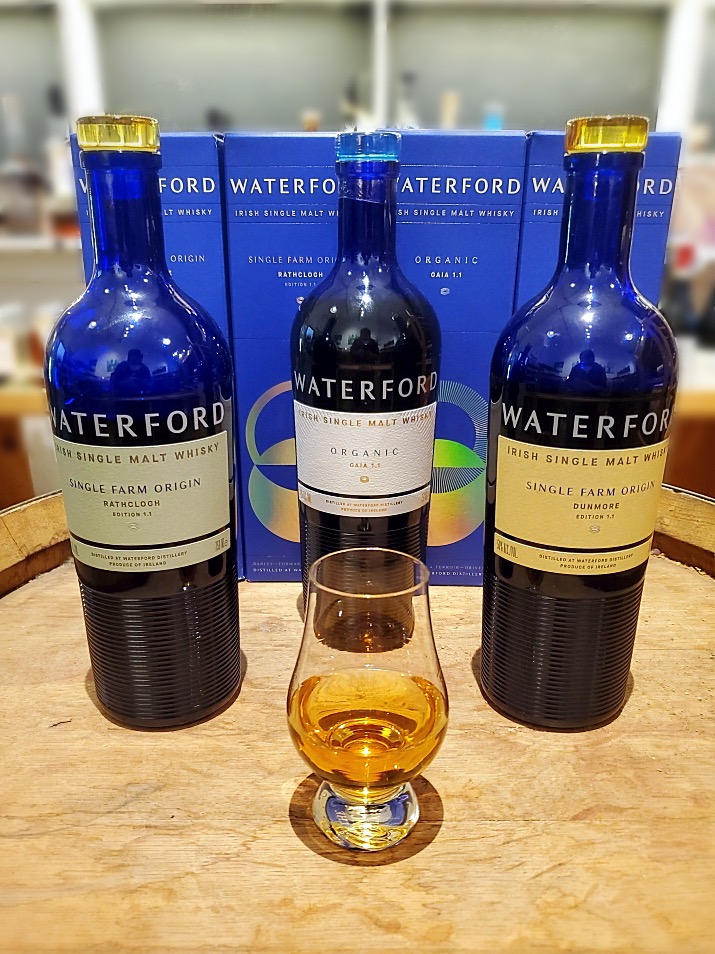