Sushi. If you had told anyone thirty plus years ago that the whole world would be crazy about eating raw fish on rice, and happily shelling out sometimes hundreds of dollars to do so, you would’ve been committed. Scenes from the 1985 classic, The Breakfast Club, said it all, as Molly Ringwald’s character, Claire, brings out her sushi lunch, chopsticks in tow, and gently pours soy sauce into a small dish before delicately commencing her meal. The disgusted and bewildered expressions on the faces of her classmates, and especially of John Bender, showed that this was a cuisine far from the norms of the times, and far from where we are today.

Now, the sushi restaurant industry is expected to take in roughly 22.5 billion dollars this year. Yep, that’s billion with a B. People are crazy about sushi, with films, comics, and tv shows highlighting this Japanese cuisine. The very best of these restaurants often earn the Michelin Guide’s coveted three stars, the highest accolade a restaurant can receive, and an achievement of a lifetime.

Naturally, when foods of this caliber are eaten, an alcoholic beverage accompanies. In this case, sake, the traditional fermented rice “wine” of Japan, is served, but wine can create equally as transcendent pairings, when done correctly.

First off, there are a few rules. Sushi, and particularly omakase menus, when the chef chooses the menu for you, are about finesse, subtlety, and elegance, so any wine that will bombarde and overrun these flavors is immediately disqualified. That includes heavily oaked wines, bold reds, and wines with “funky” flavors, heavy with mercaptans that give wine sulphur-y, rotten egg, and matchstick notes.

Wines that pair well are ones not too dissimilar to sake, those with bright acidity, clean citrus and light floral aromas, such as Dry Riesling, Aligoté, Muscadet, Albariño, Grüner Veltliner, and sparkling wines including Cava, Crémant, Prosecco, and Champagne.

Often overlooked, but perfect for sushi, are the mineral-driven, high-acid, dry wines of Hungary. These seem to be overshadowed by the country’s star wine, Tokaji Aszu, made from botrytized grapes of varying sweetness levels, that carry honeyed, marmalade, and spice aromas. Though these dessert wines are undeniably transcendent, the crisp, dry whites of Hungarian winery, Kikelet, make for more suitable sushi pairings.

Originally from the Loire region of France, oenologist Stéphanie Berecz came to Hungary to work for Disznoko Estate, a property owned by the French insurance company, AXA. In 2002 she and her husband, Zsolt, created their own domaine, Kikelet, meaning springtime in Hungarian, in the heart of Tarcal - one of the most southern villages in the Tokaj Wine Region. Over time they acquired various parcels of land, which now make up their 7 hectares of vineyards, half of plantings of Furmint, and the other half of Hárslevelű. Dry, off-dry, sparkling, late harvest, and Aszu wines are produced, utilizing organic agricultural practices in the vineyards, and native yeast fermentation and barrel aging, which takes place in the property’s 200 year-old cellar partially carved into the rock.

The 2018 Kikelet Tokaji Hárslevelű Birtok is pale lemon in the glass with aromas of honey, spring blossoms, Asian pear, and wet rock. On the palate a marked acidity snaps the wine into place, showing focused minerality balanced by floral aromas. Paired with Sushi, the clean and zippy acidity allows for each piece of fish to shine exquisitely and individually, creating a harmonious and intricate play of textures and flavors, and a well-matched pairing.

We’ve come a long way since 1985 and sushi is now nearly as common as pizza throughout the United States. If I had to imagine The Breakfast Club remade in modern times, it wouldn’t be the sushi that would be met with faces of shock and dismay in this “foodie” era, but rather some fast-food or uber-processed lunch meat sandwich on white bread, heavily laden with chemicals and preservatives. I’d say we are in a better place now. Cheers! 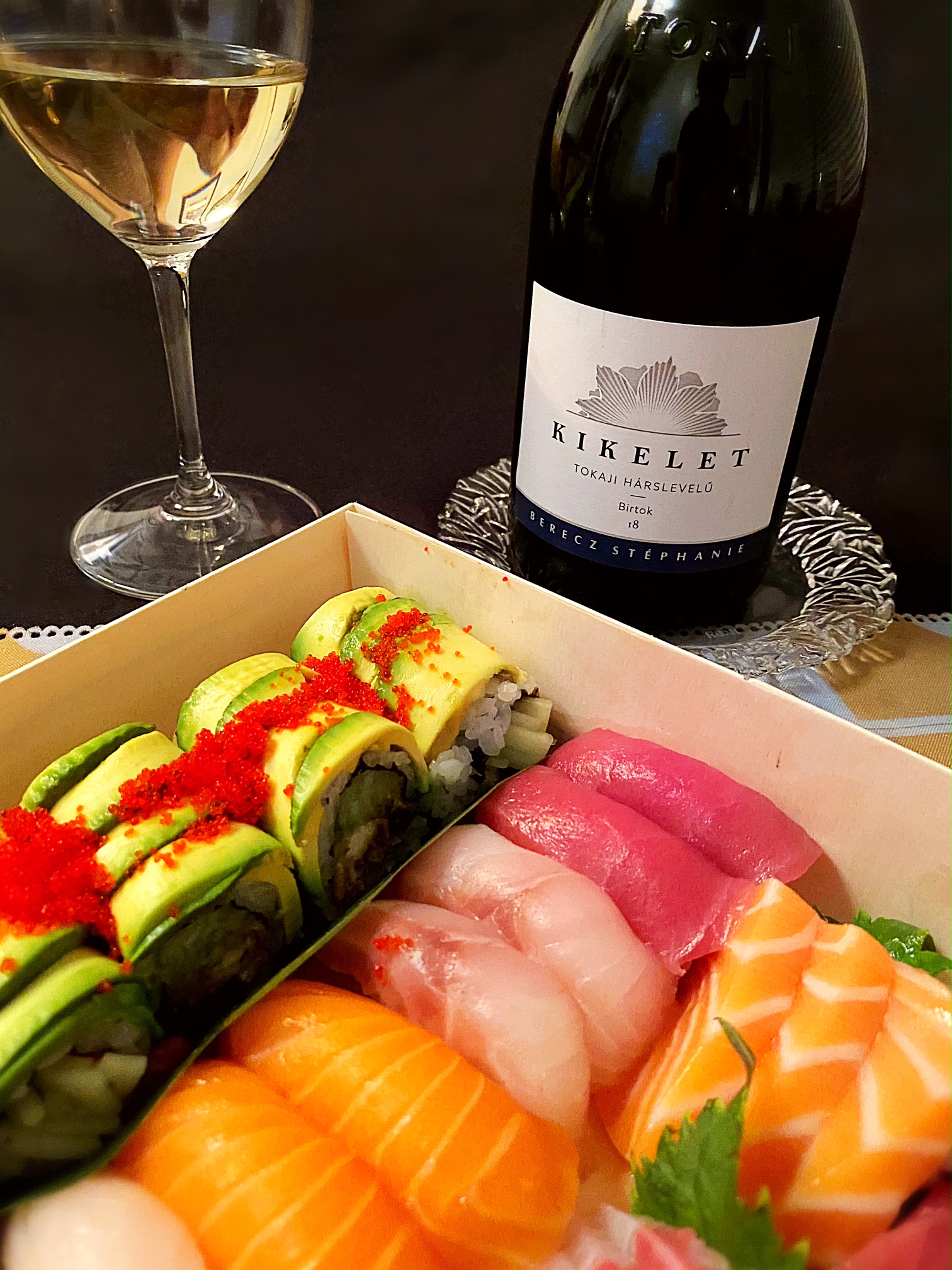