Rules and regulations. There are a ton of them for wine, especially in France when it comes to obtaining an AOC, or Appellation d’Origine Contrôlée. Aside from location, things like varietal(s), minimum alcohol levels, yield per hectare, harvesting methods, and many, many more factors can allow you to obtain the AOC when followed to the “T”, and one slip up can cost you it. In the natural wine world and beyond, some winemakers are saying, “screw the system, I’m doing it my own way,” allowing for artistic and creative expression outside of the conformity of these strict confines - punk rock winemaking. But what about when you follow these guidelines and everything is hunky-dory, until one day your AOC is stripped away and you’re left with a wine that carries the appellation name for the final year? Sell it. Sell it knowing damn well it’s your last hurrah and go out with a bang. “The asteroid is coming, let’s party!”

That’s exactly what happened, more or less, to Champagne producer Lelarge-Pugeot. Established in 1799, the estate is now on its eighth generation making wines, both still and sparkling, in Vrigny, a premier cru village in the Montagne de Reims. Comprised of 8.7 hectares, half of the plantings are Pinot Meunier. Chardonnay and Pinot Noir make up the other half. In 1985 a move towards sustainability began, leading to a certification for organic agriculture in 2015 followed by Demeter certification for biodynamic practices.

For those less familiar with Champagne production, a still wine is initially made. Then, the additions of sugar and yeast allow for a second fermentation that is carried out in bottle, usually under cap closure. The refermented wines now rest on the lees, or dead yeast particles, for a minimum of 15 months for non-vintage, and three years for vintage, Champagne. When it comes time to disgorge the wines, they are riddled, or inverted in a way to gently slide the lees down to the neck of the bottle. Once the bottle is tilted totally upside down, and the yeast cap is frozen and popped out before a mixture of wine and sugar, called liqueur d'expédition, is used to top up the bottles before they are corked and caged, allowing for variations of sweetness for the final sparkling wine.

This is where Lelarge-Pugeot got themselves into some trouble. Instead of the addition of refined sugar coming from who knows where, they decided to use local organic honey to add a touch of sweetness to their 100% Chardonnay “Bises” bottling. The decision initially passed regulations, but eventually was decided that this was against the Champagne AOC, but not before several releases were labeled, shipped, and sold. Following this past release, it can longer carry the Champagne AOC, if it’s even released at all. But by god it should, because in the glass shines a pale golden shimmer, highlighting ultra-fine persistent bubbles. Aromas of golden apple, brioche, and a whisper of honey balance a clean and delicate mousse, crisp acidity, and a long, enjoyable finish.

And what better to pair a wine with subtle honey notes than a dish incorporating honey as well - Dijon Mustard and Wild Flower Honey Glazed Roasted Quails with Sweet Potato Purée and Charred Broccolini. The vibrant acidity of the wine compliments the slight sweetness of the glaze and proves Champagne is more than just an aperitif, but can suit any plat principal as well.

Regardless of AOC, a wine must not be judged by its appellation no more than a book by its cover, or a person by their record collection... On second thought, you can judge a person by their record collection, but that’s not my point. My only hope is that Lelarge-Pugeot will continue to produce the “Bises” bottling regardless of the AOC, because it’s utterly delicious and deserves to be enjoyed whether it carries the Champagne name or not. Punk rock. 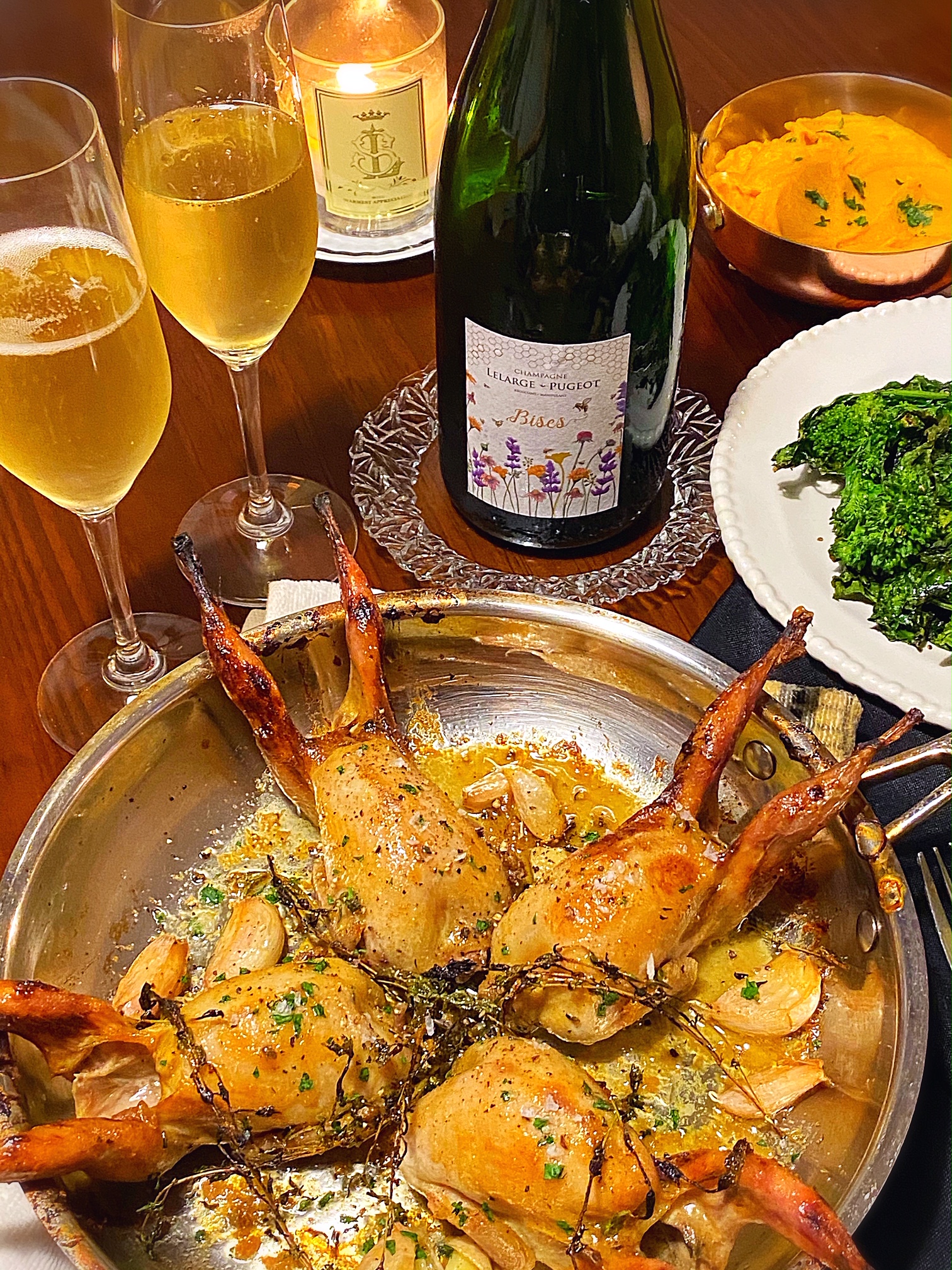