Wine from the Czech Republic has a long, storied history, like many of its neighbors. Viticulture, which is mostly practiced in the southern part of the Moravia region, dates back to the 3rd century, predating the country’s well-known history of brewing beer. Like much of Europe, the development of winegrowing in these regions was the result of changes within the Roman Empire. In the late 200s, Emperor Marcus Aurelius Probus had struck down an earlier edict that prohibited vine-growing in territories north of the Alps. This single action changed the course of wine history, playing a significant role in the history of Austrian wine as well as in Czechia. Though the wine we drink today is likely quite different from what was made well over a thousand years ago, the lineage of wine is deeply entangled with the whims of those in power, for better or worse. Luckily for us in the 21st century, we have the opportunity to try wines made from different grapes and coming from more places than most people in all of human history. One such wine from Moravia is Martin Vajčner’s “Granitová Skála”, a rocky wine with an unabashed personality and sense of place.

Martin Vajčner’s family can trace its winemaking history all the way back to the 1630s. After World War II, his grandfather became one of the best known winemakers in Moravia. Following that, his son, or Martin’s father, became a director at one of Czechia’s largest wine companies. Though Martin has followed his fathers by becoming a winemaker, he’s made the conscious decision to pursue a natural, lower-intervention approach. In this sense, his path parallels that of young winemakers across Europe, many of whom are breaking with the corporate, industrial approach of their predecessors. Like those pursuing this path, Vajčner picks his grapes by hand, uses indigenous yeasts for fermentation, and uses leftover grape pulp as fertilizer in the vineyards, among other ecologically holistic methods.

Vajčner’s operations are still family-run, which now include 5.2 hectares of vineyards situated in the Znojmo district, the most western part of Southern Moravia, placing them in the heart of Czech wine country. The vineyards, all cared for by means of organic farming, are broken up into seven distinct sections to demarcate the varying climatic and soil conditions found within the land. They’re fortunate to be adjacent to the beautiful Podyjí National Park, meaning the surrounding land has been legally protected for decades, which has preserved a biodiversity that mingles well with Vajčner’s vineyards. They work with grapes that have long grown in Czechia and Austria, such as Riesling, Müller-Thurgau, Sauvignon Blanc, Veltlínské Zelené (Grüner Veltliner), and Frankovka, among others. The cool-climate found in this part of Znojmo allows Vajčner to accentuate the natural acidity found within all these grapes, no matter where in the 5.2 hectares they’re grown. His wines exhibit beautiful balance with zesty, integrated acid, proof that he knows precisely when to pick the grapes so they can best exhibit when and where they’re grown. 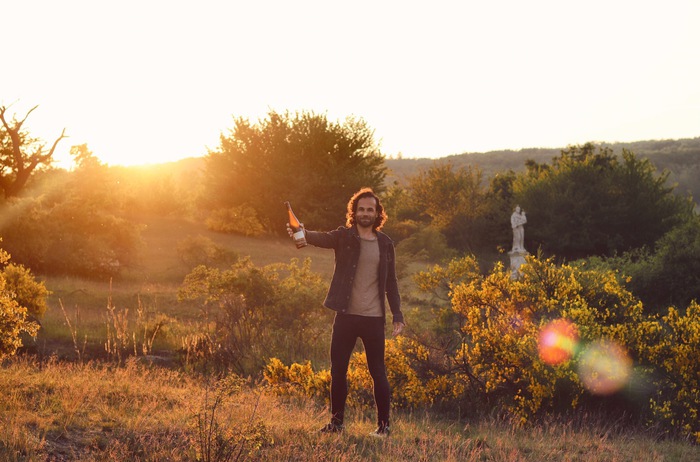 The “Granitová Skála” cuvee, a 50-50 blend of Riesling and Müller-Thurgau, comes from hard granitic subsoil, offering the wine a distinctive rockiness undergirding all the distinctively Vajčner zest. It’s in the name: “Skála” just so happens to be the Czech word for “rock”. The wine leads with this wet, rocky minerality on the nose, with an evident citrus quality that’s initially hard to pin. On the palate, a tense acidity brightens the mouthfeel that exhibits the same minerality through the finish. By the second glass, I realized the citrus quality was precisely like a yuzu fruit - the nose was a bit more perfumed than a lemon, and the acid led the rest of the palate rather than the other way around. Mystery solved.

When tasting and smelling wine, I like to start with very general ideas of what the wine may be expressing: does it evoke a citrus quality? perhaps orchard fruit, meaning something like apple or pear? Sipping can be a process, and sometimes a wine’s essence takes a moment to reveal itself. When starting with general, maybe even vague descriptors, it becomes easier to narrow down our tasting notes. Or, if one simply wants to ride the wave of a mirthful drink, worry not whether a wine’s citrus element is yuzu rather than lemon. There’s no right way to imbibe.