Time to get out. Time to leave the congested, grid-locked, stress-inducing chaos of New York City and decompress in the woods.

Since Covid, I haven’t left at all. Initially diagnosed positive in mid-March, I quarantined for six weeks, barely stepping foot outside except for the necessities - food, medicine, and a few precious glimpses of sunshine. Then it was time to return to work, focusing on how to adjust the shop to these times, and “pivot,” as they say. Months went by and things improved, both with the store and my health. But one can only go so long before the noise and dense-living gets to you and you need to escape to the quiet, rural areas surrounding New York City in all directions.

In the company of my wife and a few friends, we drove upstate roughly two hours to a small cabin on Yankee Lake, just outside of the town of Wurtsboro, NY. Not wanting to leave all of my creature comforts behind, I selected a few choice wines for the weekend, some trusted favorites and several new wines to the shop that I’d been wanting to taste. We arrived just in time to prepare dinner - grilled flank steak with a sweet and spicy tamarind sauce and roasted corn salad. A few bottles of wine down the hatch and it was time to get some rest, with an agenda full of activities for the following day.

The next morning we visited a quaint farmer’s market, picking up several locally made products, before heading to a trail ride we had booked thirty minutes northeast of our cabin. At this point we didn’t have a plan for dinner later that evening and it was becoming the question in everyone’s mind. We arrived at the picturesque stables where the horses were quietly, lazily eating their hay, and then BAM!, the idea hit like a bolt of lightning - Hay Roasted Chicken! The recipe is a Thai countryside classic, where after the rice paddies are harvested, the leftover straw is burned inside a pit of rocks. A whole chicken is marinated and roasted in smoldering hay, imparting a deep, aromatic, smoky flavor. The idea was set, so after a beautiful and scenic ride walking and trotting through woodlands and flowered prairies, we negotiated taking some hay off their hands, to the surprised looks of both owners and horses alike.

We arrived back at the cabin and quickly set the plan into motion, marinating the bird and arranging rocks in the shape of a fire pit. Once set, we balanced the chicken upright onto a leftover wine bottle from the night before. Filled halfway with water, the bottle acts as both a stand for the chicken, as well as insurance that the bird will stay moist, creating steam as things heat up during the intense cooking process. A metal tin or bucket is used to cover both chicken and bottle and then it is time to set things ablaze. The trick is to keep the hay smoldering for the entire length of the cooking time, roughly 45 minutes, give or take, depending on the size of the chicken. Admittedly, this was our first time trying this recipe, but the results were impressive, with a golden skin, and moist, smoke-infused meat.

A meal as intensely flavored as this requires a bold, assertive wine, and the 2014 Domaine de la Terre Rouge’s Syrah “Les Côtes de l’Ouest,” from the Sierra Foothills of California is up to the challenge. Deeply pigmented and beginning to show some evolution in color and tertiary aromas and flavors, this blend of 96% Syrah and 4% Viognier is full of tar, dense black fruit, dried cherries, black pepper spice, and savory herbs, backed up by a rich body and dense, chewy tannins - powerful enough to take on this smoky bird.

The meal, both a success in cooking and wine pairing, was a surprise and treat for us all. We finished the bottle, and another, then treated ourselves to some whisky and card playing, as one does when in a cabin in the woods, before settling in for the night. Now, decompressed and deeply satiated, it’s time to return to the hustle and bustle of the city and back to the daily grind. I can only hope that I can find a park in New York that will let me roast a chicken in a blaze of burning hay. 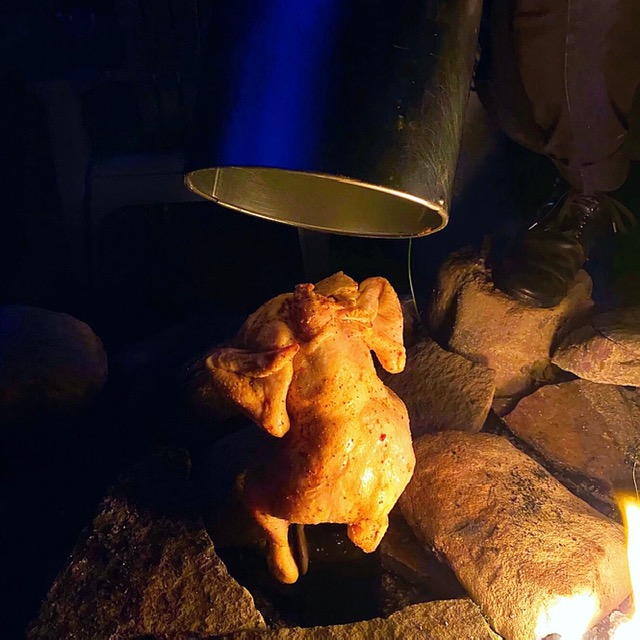 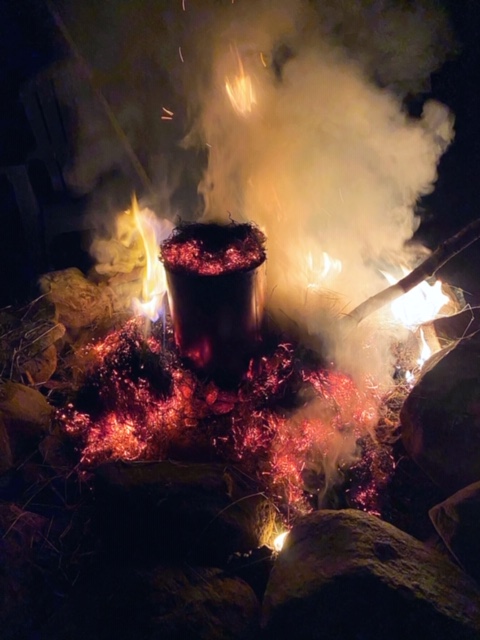 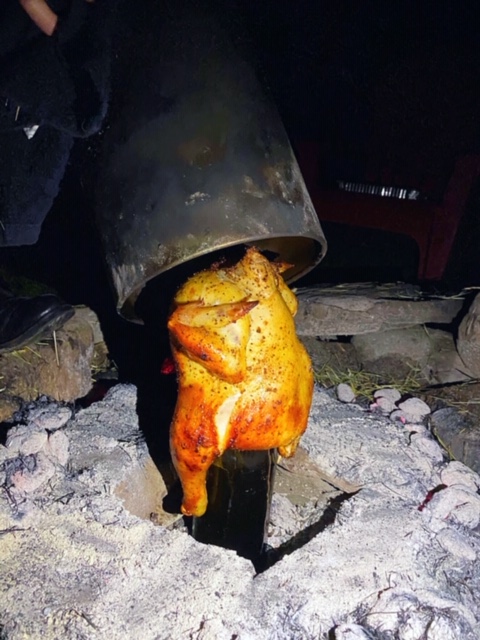 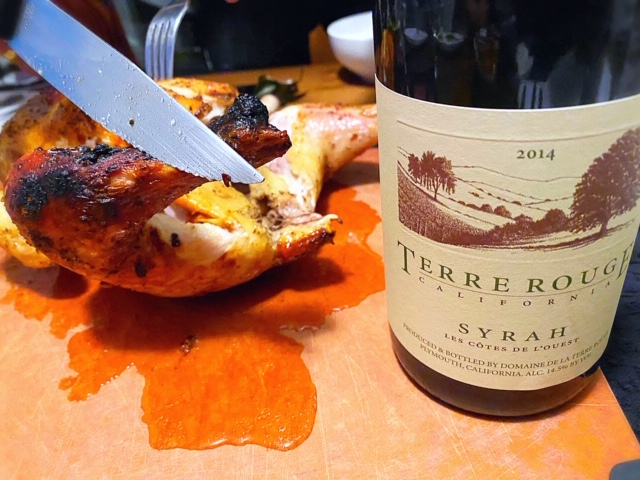