You gotta give it to the French, they got a few things right: beautiful castles, Haussmannian architecture, art, the 35 hour work week, five weeks of vacation a year, passion, joie de vivre, and arguably, some of the best food and wine in the world. I feel lucky to have spent several years of my life in Paris, attending culinary and wine school, and eventually staying to work as a private chef for the attachés of the American Embassy.

But going into it I had nothing, no french language skills, no formal cooking skills, I was barely old enough to drink wine, and didn’t know much about french culture beyond the artists we studied in school and the French Revolution and holiday celebrated to commemorate it, Bastille Day, July 14th.

My very first trip to Paris was in the summer of 2008 with the goal of finding an apartment for my time attending culinary school. I was hopping around the city trying to get a feel of the neighborhoods and seeing where seemed like the right fit - somewhere with plenty of local restaurants, bars, and outdoor markets where I could get my groceries. Thoughts of ordering baguettes, charcuterie, figs, brie, and fresh, briny oysters swirled in my mind, all being ordered with my hypothetical future French language skills.

One evening while sitting at a cafe in the 14th arrondissement, casually having dinner, it became impossible not to notice hordes of people all heading the same direction through the streets, up from Montparnasse. I was completely ignorant that today was Bastille Day. After finishing dinner, I followed the hordes straight to the Tour Eiffel to watch a celebration of fireworks exploding around the tower, an unforgettable experience I was lucky enough to stumble upon.

Since that day, whether in France or elsewhere, I celebrate Bastille Day in true French fashion.

This year I plan to cook one of the most iconic dishes in the French culinary repertoire, Coq au Vin, or chicken (traditionally an old rooster), stewed in wine with bacon, onions, and other aromatics. I cut no corners and go as classic as can be, making the dish over 3 days. Day 1, the bird and aromatics marinate in wine. Day 2, they are cooked and stewed together and then cooled in the fridge overnight, allowing all the flavors to mingle. And finally, day 3, it’s time to eat. In all honesty, it’s more complex than that, but you get the gist of it.

The flavors are bold, smoky, earthy, and comforting, and require a wine of equal character and weight. La Ferme des Sept Lunes St. Joseph Pleine Lune 2016 is the perfect match.

Established in 1984 by current proprietor Jean Delobre’s grandfather, La Ferme des Sept Lunes sits in the hilltop village of Bogy in the Northern Rhone. At that time, the estate was covered in diverse plantings of vines, orchards, and grains. The family sold off the fruit produced to a local co-op, but when Jean eventually took over, he decided to produce his own wine, with his first vintage in 2001. Everything is certified organic and biodiversity is still encouraged in the vineyard, with wildflowers and grasses growing throughout.

The 2016 Pleine Lune comes from one of the warmest locations of the vineyard. Sourced from four plots of south-facing Syrah vines, the grapes are hand-harvested, destemmed, and fermented for over 3 weeks in concrete before transferring to 80% neutral demi-muids and 20% old barrels for 12 months. It’s then blended and aged together before botting.

In the glass it is a deep, intense purple. Notes of crushed blackberry, black cherry, and cracked peppercorn spice with a tinge of smoke perfume the glass, and softened tannins and focused fruit come through on the palate. Despite its richness, the wine still comes off with a light, juicy, playfulness - delicious when paired with this Coq au Vin and a true celebration of France. 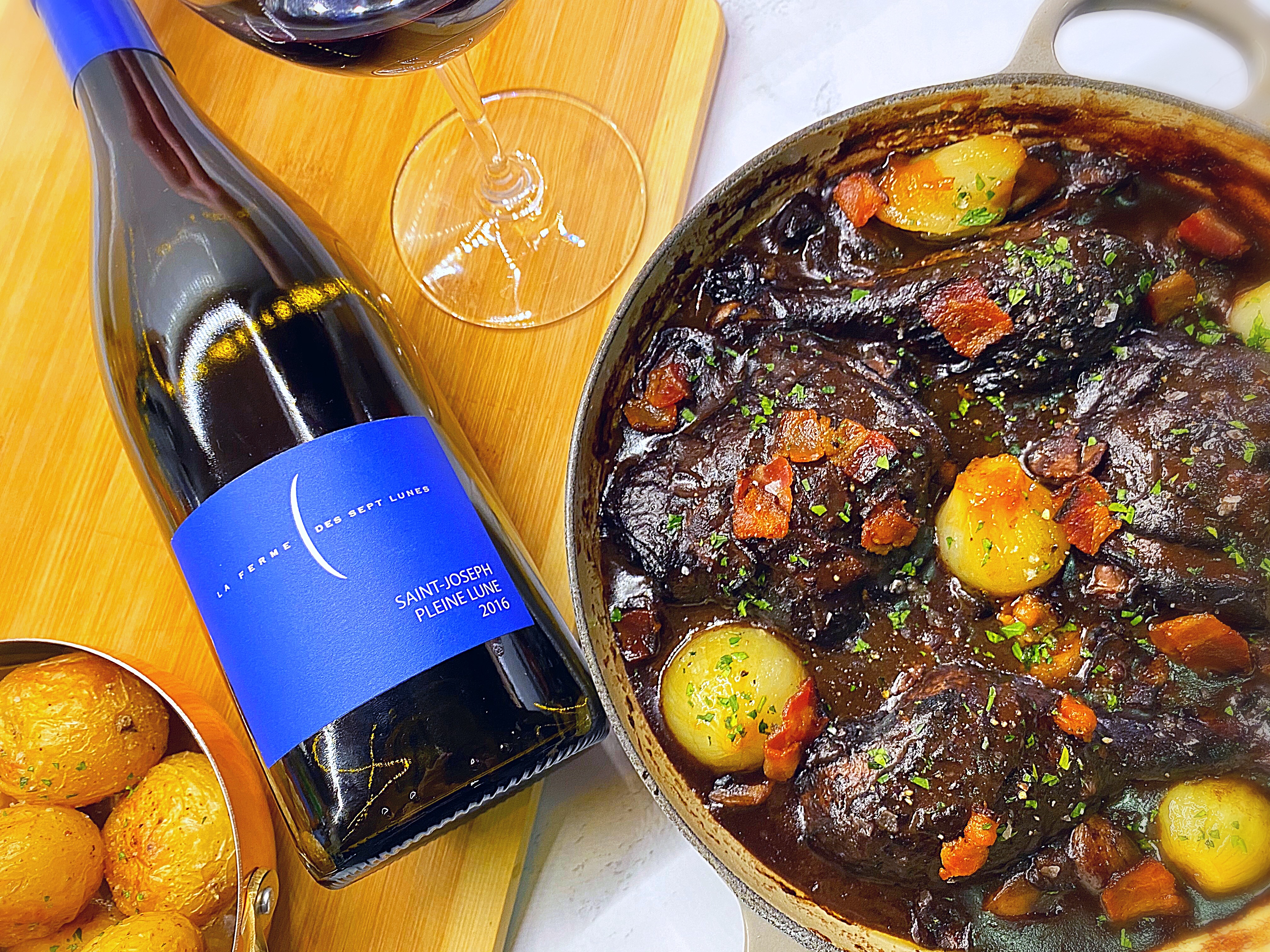