This week I returned to an old favorite of mine: Arriana Occhipinti’s “Il Frappato”. What more can be said about her wines? They’ve been written up and discussed by wine writers and sommeliers the world over, and for good reason. For many, they’ve been a point of entry for appreciating Sicilian wines, proving to hesitators that the island can exhibit an elevated level of authenticity with its biodiverse and (seriously) organic winegrowing. I can attest; my own sense of grapes like frappato and nero d’avola - and really, Sicilian wine generally - is deeply entangled with Occhipinti’s wines. Granted, I’ve come through a perspective curious about biodynamic and organic wines, for which her wines proved to be the perfect avenue.

Her influence is hard to understate - Azienda Agricola Occhipinti is now one of the largest biodynamic wine producers in the world, with production exceeding that of 120,000 bottles a year. There’s no doubt it’s why I was able to find her bottles in small-town Virginia back when I was first becoming interested in wine. But how did she get to where she is today?

Her passion for wine dates back to when she was 16, when her uncle Giusto Occhipinti of the COS estate invited her to the Veronan wine exposition “Vinitaly”, which sparked an interest in viticulture and oenology. COS is one of the most established and well-renowned organic wineries in Sicily, and the tutelage offered by her uncle parted Arianna with commitments to organic farming, hand-harvesting, and the use of indigenous yeasts. She eventually received a hectare of abandoned vines in Vittoria, a commune in the southeast of the island. Though a remarkable amount of acreage to receive as someone so young, she’s worked hard to revitalize the land. She harvested her first vintage at the young age of 22 and has steadily expanded her plantings ever since. 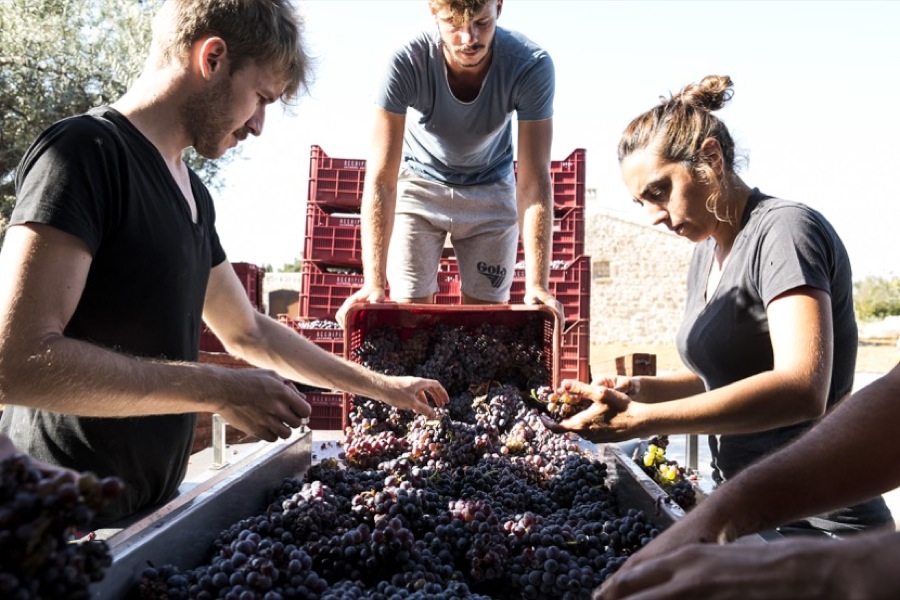 These plantings, especially of the indigenous frappato and nero d’avola grapes, have been done in the selection massale style, which is a return to an older way of propagating vineyards that spurns what’s known as clonal selection. This means that her vineyards were planted with cuttings of old vines from nearby land, rather than carefully curated clones grown in a vine nursery. The result is the vineyards becoming gradually distinct rather than consistent and homogenous. Selection massale involves a whole lot more toil and time than the widespread practice of clonal selection. But for those of us interested in terroir being expressed through a bottle of wine, it’s not hard to see which method of vineyard development is preferable.

Occhipinti’s “Il Frappato” is one of the fruits of these efforts. It’s a wine that deserves time in bottle, though Frappato is a grape that’s uniquely delicious when drunk young. I’ve most recently had the 2016 vintage, so naturally the 2020 being drunk now struck me as distinctively fresh. The nose was red-fruited and imbued with notes of garrigue, but both in earth-driven ways. Think strawberries rolled in dirt, or low-hanging shrubbery that’s a mix of minty herbs and bright flowers. It’s no surprise; the wine just feels grounded, striking a delicate balance without trying to be something it’s not. The palate reminds of the nose, but with a more pronounced minerality that elevates, perhaps due to the chalky and red-sanded soils the frappato is planted in. I preferred it to the Barolo we also had at the dinner table.

There was a time, for me, that Occhipinti’s wines were emblematic of a new horizon. I have a feeling she’s had the same effect on others, especially wine drinkers of a younger generation. Occhipinti, in many ways, has represented a new guard in winemaking; she’s inherited some of the best and most authentic practices from prior generations while doing something unabashedly new. But as the years go by her name will continue to grow, becoming ever more synonymous with Sicily, just as her uncle’s wines have. Hopefully this means her organic practices and non-interventionist methods continue to become the standard, rather than strike us as novelty. This is all the more reason to seek out other producers, new and old, small and not-so-small. I know I won't stop exploring this island’s wines, and you shouldn’t either.