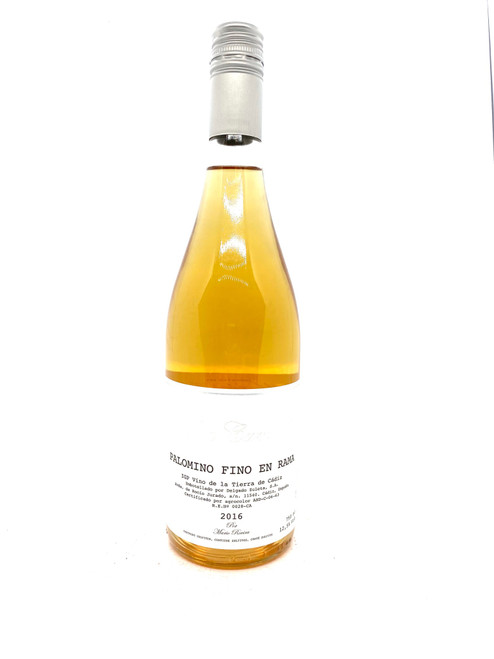 With a few vintages of his Palomino Fino-based blend from Bierzo under his belt, the ever restless and curious Mario Rovira set out to better understand the historical vinification of this Andalusian grape variety. Teaming up with Bodegas Delgado Zuleta in Jerez, Mario created an experimental project of four botas of Palomino Fino, sourced from the albariza soils of the Pago de Balbaina, to better understand how to craft unfortified wines that develop under a layer of flor.  The result of this experiment is a Vino de la Tierra Cadiz called Tosca Cerrada. Organic

Flaco Cabernet Sauvignon is a stunning value that is produced from organically grown grapes near the town of Toledo, central Spain, 60 miles south of Madrid. Dry climate and cold nights produce ripe...

The 400-butt solera is over a century old and located in the historic Bodega Santa Ana in Sanlúcar’s Barrio Bajo, which used to be the house of the Rainera Pérez Marín...

2018 Pecorino 100% Pecorino. Manually harvested grapes from the Lapedona hills in Fermo. Matured in steel tanks before resting in the bottle for at least 4 months. Maddonabruna was born, evolved...

2018 Albariño   The winery began producing wines in the 1930’s under the management of Serafín Gondar, and was named after the founder Serafín, whose nickname was...

2018 Macabeu, Xarel-lo, Garnatxa, and MalvasiaOwned by the Suriol family, Cellers de Can Suriol del Castell is known for making wines and vintage Cava with personality in the organic winemaking...

2015 Plavac Mali Sv. Vicenco is located in Croatia on the island of Lastovo. Croatia has over 1,000 islands – amongst them, Lastovo is furthest away from the main coast, and is actually...

2019 Plavac Mali   Sv. Vicenco is located in Croatia on the island of Lastovo. Croatia has over 1,000 islands – amongst them, Lastovo is furthest away from the main coast, and is...

2018NebbioloFrom 30 year old vineyards situated in Montà at an altitude of 280-320 meters above sea level. The soils are very sandy andthe sites are situated South-West. Maceration on skins...

2016 Plavac Mali, Plavina, and Cabernet Sauvignon   Sv. Vicenco is located in Croatia on the island of Lastovo. Croatia has over 1,000 islands – amongst them, Lastovo is furthest away...