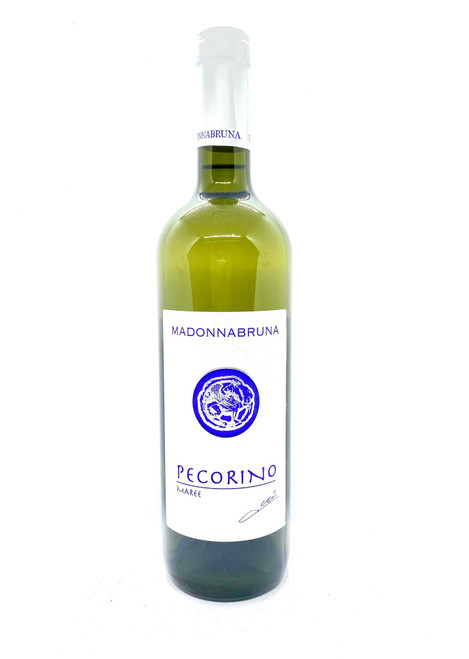 100% Pecorino. Manually harvested grapes from the Lapedona hills in Fermo. Matured in steel tanks before resting in the bottle for at least 4 months.

Maddonabruna was born, evolved and continue to grow as a family business, handed down from generation to generation. It all started in 1967 when Ferruccio Petracci bought the first land, in the gentle hills around Fermo, near the Adriatic sea, in the Region of Marche, at an altitude between 100 and 300 meters above sea level. The sea breezes that caress the vineyards, the mild climate and the fertile grounds make those hills the ideal place for the cultivation of the grapevines. Ferruccio died in 1978 in a car accident and his son Paolo had to take over the estates’ affairs as he was still attending Agrarian university. At first Paolo was focused on planting more vineyards and selling the fruit, but his dream was to realize his father’s plan: build a cellar and make his own wine. The work finally started in 2000 and by 2002 the first batch of Montepulciano was harvested and vinified at the estate.Organic.

Angelo Muto’s flagship parcel is in fact situated directly atop an abandoned sulfur mine, on a very steep slope at high altitude. The vineyards are worked entirely by hand, as much a result of...

Varietal: Aglianico Vintage: 2009 A complex red with strong tannins and notes of dark fruit, spice, balsamic, dried fig,   and leather. Made from 100+ year old vines. This if the first...

2018 Albariño   The winery began producing wines in the 1930’s under the management of Serafín Gondar, and was named after the founder Serafín, whose nickname was...

2015 Plavac Mali Sv. Vicenco is located in Croatia on the island of Lastovo. Croatia has over 1,000 islands – amongst them, Lastovo is furthest away from the main coast, and is actually...